Finally, Todd Pletcher has brought all his four Derby’s contending horses to Churchill Downs. They include Audible, Magnum Moon, Vino Rosso, and Noble Indy which safely arrived from Florida. The four will contend in the Kentucky Derby 2018 on the 5th May. Two weeks to come until the Derby, the Pletcher and his teams seem to conduct adorable preparation on the next Saturday.

Audible is the strongest among these four but Pletcher along with exercise Rider, Nick Brush seems to take anything necessary to optimize the chance of winning the Run for Roses. Several ownership groups actually own these Pletcher’s horses which put their trust on this 50-years old thoroughbred trainer.

Pletcher’s horses are occupying the top five on the leaderboard. Magnum Moon is still on top of the leaderboard with 150 points. Audible the strongest one is in the third place with 110 points. While the fourth and fifth place is for Noble Indy and Vino Rosso with 110 points and 107 points. It’s only Good Magic that split the Pletcher’s “team” in the second place with 134 points.

Several clubs and farms actually share the ownership of Audible including the WinStar Farm, Head of Plains Partners, China Horse Club International, and Starlight Racing. Audible hold a 4-0-1 record in five starts, making him the strongest in “team”. His remarkable winning in Florida Derby leads him into the third place on a leaderboard. Audible gets more focused on his last games with collaborative press-the-pace and middle-of-the-pack running style.

Magnum Moon is Pletcher’s horse which belongs to Lawana and Robert Low and is a Kentucky-bred. Along with Always Dreaming horse, Magnum Moon won the Kentucky Derby last year, and the former winning is with Super Saver in 2010. He holds 4-0-0 record for four starts and occupies the first place on the leaderboard. With a press-the-pace running style, Magnum Moon won the Grade 1, Arkansas Derby, two weeks ago. He is a very talented horse as he could win Grade 1 derby in his fourth starts.

Vino Rosso is another Pletcher’s Kentucky-bred horse which belongs to Repole Stable and St.Elias stable. The horse holds a 3-0-1 record in five starts and occupies the fifth place in the points list. Vino Rosso seems to develop the running style form press-the-pace to a closer for his recent races, he may use the last style for the upcoming Kentucky Derby. Pletcher seems to praise the Rosso’s performance in 1,8 miles race.

The last Kentucky-bred horse trained by Pletcher is Noble Indy. He belongs to WinStar Farm and Repole Stable. Along with the Super Saver, Noble Indy won in 2010 and 2017 with Always Dreaming. Noble Indy holds 3-0-1 record in four starts and occupies the fourth place on the leaderboard. He won the Grade 2 Louisiana Derby, where he was about to lose and made an incredible comeback. Pletcher admits that Noble Indy has become maturer and seems promising for the next Derby.

These four incredible horses are about to shock the Louisville on this May. It’s only two weeks to go until the spectacle. Other horses have also made a touch down in Churchill Downs. They include Promises Fulfilled the winner of Fountain of Youth, Free Drop Billy. Bravazo the Risen Start winner, and Flameaway. Good Magic and Lexington Stakes have also arrived in the Churchill down along with the Tom Amoss’ Lone Sailor. Other contenders will join the settlement during this week as it’s actually normal to have an earlier arrival to ensure their runners settled at the field race. However, some trainers tend to wait until this weekend to arrive in Churchill Down.

Read More: How has the Kentucky Derby changed in 2018?

What it might be disappointing is that the Gronkowski the colt from England doesn’t make it to the settlement after spiking fever during the last week. The Thoroughbred has confirmed the absence of Gronkowski at Kentucky Derby 2018 on dawn Monday after the colt experienced the setback in the weekend. Another colt will also miss the arrival is Quip which will skip the Kentucky Derby 2018 due to his preparation for Preakness. The absence of Gronkowski and Quip makes Combatant and Instilled Regard entering the twenty and eligible to join the 5th May Derby. 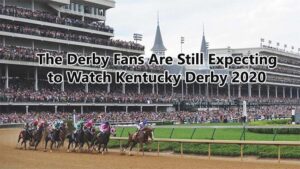